Since the early stages of the 20th century, abstract design has been a central feature of modern-day art.

It is an art form often seen as carrying a distinct moral dimension, representing virtues such as purity, simplicity, order and spirituality.

What is meant by an ‘abstract design’?

Abstract design uses the language of shape, form, colour and gestural marks to create work that does not attempt to depict visual reality accurately. Indeed, ‘abstract’ itself means ‘to withdraw or separate something from something else’.

It is a term applied to work that is based on a landscape, object or figure and in which natural forms have been heavily simplified or ordered. That could be in the form of geometric shapes, or gestural markings.

‘Abstract’ is a word used to describe art of this kind, although some artists choose the terms ‘non-objective’ or ‘concrete’ to characterise their creative output.

What are the core principles?

Despite its appearance, abstract art is structured and follows four core principles that allow it to be identified as such.

The Rule of Thirds

The basic premise behind the Rule of Thirds is to mentally divide an image into horizontal and vertical thirds so that there are nine sections. You then position the most important visual elements of your piece along those lines, or where points meet.

The idea is every abstract artwork should have one area that draws the eye more than the rest of the piece. This spot will be the entire focus of a painting, and should therefore contain the most interesting use of colour, shape, form and texture.

The rule of thirds ultimately ensures a piece is as visually appealing to the viewer as possible.

The second core principle of abstract art is to ensure each corner is different, essentially encouraging artists to embrace variety.

It should be engaging, unique and inspired in order to be noticed by an audience.

Many mediums use the diagonal method, which is a concept that states a work is more interesting and aesthetically pleasing if the elements within it are positioned diagonally.

This composition draws the eye and creates a more complex piece, encouraging a viewer to question the artist’s intention and underlying concept.

Ensuring your work has a strong value composition is an essential ingredient of abstract art and design. By using a sound arrangement of different elements, you can create a strong piece that will pique the interest of even the most passive viewer. These compositional elements can include the use of shape, their relative value, lines, value contract and colour temperature.

Most artists, and art critics, will have an instinct for what constitutes good art and will usually be able to recognise an effective and eye-catching composition. That being said, this is rarely achieved naturally or by an artist improvising; instead, these elements require careful and meticulous planning to create a truly great work of art.

By the end of the 19th century, abstract artists had begun to emerge. They were eager to break free from the constrictive rules of Renaissance art, underpinned by the logic of perspective and sought only to replicate reality as closely as possible.

Here, we identify the most renowned abstract artists that continue to have a significant impact on the genre.

Pollock is one of the most highly-revered and prominent forces behind the abstract expressionist movement. His radical style is recognised globally because of the drip technique seen in many of his dynamic paintings.

Arguably his most notable is ‘Convergence’, from 1952 – a collage of splattered colours that creates an array of eye-catching shapes and lines.

It is a work that exemplifies the ideas of abstract art, and is seen as a key development in art history because of its embodiment of expression and free speech.

To the untrained eye, an abstract work such as this might appear to display nothing but chaos. However, through this piece, Pollock was able to express his thoughts regarding the looming threat of Communism and the fear of a Cold War with Russia. As such, ‘Convergence’ has been described as ‘everything that America stood for all wrapped up in a messy but deep package’. 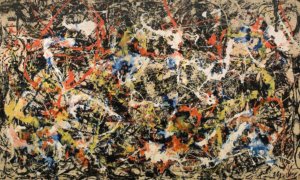 An early champion of abstract painting, Wassily Kandinsky was a member of the infamous Abstraction-Création – a collective of abstract artists that paved the way for the genre by exhibiting in group shows.

Kandinsky’s influence was monumental, producing more than 600 works throughout his career. A piece from 1913, ‘Painting with White Lines’, notably sold for $41.6 million. However, arguably his most famous and significant work is ‘Composition X’ from 1939. This was the last piece in the series titled ‘Compositions’, and ultimately concluded his exploration of the purity of form and expression. It is often critiqued for its divergence from its predecessors, which avoided the use of black – a colour that engulfs this work.

Black, to many, is representative of Kandinsky’s interest in the universe and its complexity. However, equally, it signifies the end of both this series of work and his life – for he passed away five years after its completion. 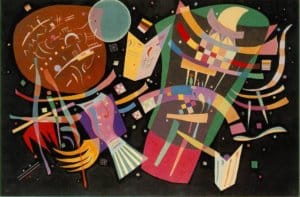 Gerhard Richter is a contemporary multidisciplinary artist renowned for a diverse portfolio of photorealism, mixed media installations and abstract art.

He began to produce abstract paintings in the late 1970s, creating work that conveyed sentiments that are undeniably simple and true.

In 1982, Richter was quoted as saying: “Abstract pictures are fictive models, because they make visible a reality that we can neither see nor describe, but whose existence we can postulate.”

He has many incredible pieces but ‘Abstract Painting 599’, from 1986, is perhaps the most notable of his abstract works. It is not only one of the artist’s favourite pieces, it is also the most expensive. It was last recorded as being sold for between £14m and £20m at Sotheby’s in London five years ago.

‘Abstract Painting 599’ is remarkable for its in-depth investigation into the enigmatic juncture of sense and non-sense. Indeed, Richter’s abstract works in their entirety interrogate both the limits of representation and the nature of perception as well as the functions of visual cognition. 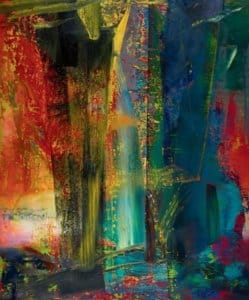 Piet Mondrian is one of the most well-known abstract artists from the 20th century, widely recognised for his geometric abstract art.

He believed universal purity could be expressed via ‘Neo-Plastic’ also commonly known as De Stijl, a term adopted by the Dutch pioneer for his type of abstract painting.

Balance and compositional harmony are key elements of his works, focusing on the placement of colours, the surfaces used and the size of each element.

Each piece was carefully crafted and meticulously designed to achieve a unique sense of stillness.

Mondrian’s ‘Composition II in Red, Blue and Yellow’, from 1930, is undoubtedly his most iconic work. It has had a profound and lasting influence on popular culture, impacting art, music, fashion and architecture industries irrevocably. It is a piece that many feel achieves a balance the artist strived for with its arrangement of contrasts: non-colours and primary colours; vertical and horizontal. Its simplistic composition reduces each element to its most basic form to truly represent universal forces as Mondrian saw them.

Abstract art has stood the test of time, holding a strong place in contemporary art and continuing to attract interest in commercial galleries across the globe.

Its popularity stems from its distinct purpose for both the artist and viewer, with many individuals collecting abstract paintings to enhance their surroundings or as an investment.

It is clear this is a genre that will continue to thrive and be valued highly in culture for years to come.